They saved hundreds of lives selflessly as humanity is above everything

A few months ago, when a Hindu woman was battling for life at a government hospital in Jammu after excessive bleeding during pregnancy, the family struggled for days without any help until they found a hero—a Muslim blood donor from Kashmir. Abdul Majeed Bhat alias Gamgeen of north Kashmir’s Pulwama district came rushing to the hospital and donated blood for the woman. This kind gesture saved the woman’s life and won Bhat many hearts. On January 3, Bhat received a call from a friend about the pregnant woman from a far-flung village in Kishtwar district. She was in dire need of blood, and her family could not find a suitable donor, which is when Bhat came to their rescue. For the 54-year-old, this was not the first time he has saved lives. He has been doing so since 1980 when he donated blood for the first time at the age of 15.
For nearly 40 years, his humane gesture has given a new lease of life to many people. Now-a-days Bhat donates blood regularly for cancer patients admitted to different hospitals of Jammu and Kashmir. He has donated for many accident, blast and earthquake victims too.

An employee of the Education Department from the Kakapora area of Pulwama, Bhat said he was doing it for the sake for Allah.“For me humanity comes first. I don’t discriminate people on the basis of their region and religion,” he said. Bhat was inspired by his father, who motivated him to serve humanity at a very early age.“My father would always encourage me to serve others which gave me strength to reach to this level,” he said.
Bhat has formed a group of voluntary blood donors under the Social Workers Committee, J&K, who provide blood on a regular basis during emergencies.

Like Bhat, Shabir Hussain Khan of Kadi Kadal in Srinagar is also the epitome of selflessness. Khan (53) is a  big-hearted man, who has donated 166 pints of blood over the years. The altruist has become an inspiration for over 40 years as recipients of his 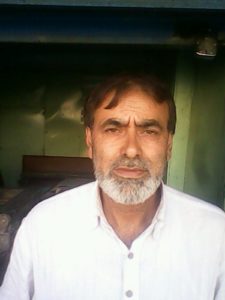 blood are from the rare O–ve blood group. “I was a teenager when I donated blood to my friend who was critically injured during a football match,” he said. So far, he has donated for earthquake victims in Kashmir and even for tsunami victims in south India. Last month, Khan donated the 166th pint of blood to a patient from Kargil. The family of the patients and doctors appreciated him for his life-giving act.

Disturbed minds
Mothers are stronger
US nod for Indian doctor’s invention
Sudan To Outlaw Female Genital Mutilation
Over 52,744 Ayushman Bharat centres set in states and UTs
Healthwire Editorial #BullyingIsNotOK: Time’s Up for Bullying
Kamlesh Tripathi on his book 'Gloom Behind the Smile' in which he chronicled the 14 year long strugg...
CII Hopes For a Robust, Collaborative Healthcare Budget Allocation

Over 52,744 Ayushman Bharat centres set in states and UTs
#BullyingIsNotOK: What Does The Indian Law Say About Bullying?
Will German Ice Wine Become Even More Of A Rarity?
How Deadly Is New Coronavirus?
10 Ways to Achieve Your Life Goals
Transgenders may have sperms ; say researchers
Blood Test can Detect Rejection by Antibodies after Kidney Transplant
So, Which One Unhealthy Habit Would You Quit This Year? Delhi Speaks to Us